While at graduate school, first at Johns Hopkins University, and later at Georgia Tech, Andrew Tsourkas became interested in developing agents for real-time imaging of RNA in single living cells. At the time there was a growing realization that cell-to-cell variations in gene expression had important biological consequences underlying phenotype diversity and cell fate; however, most genetic analysis tools relied on measuring average RNA levels across thousands of cells and/ or were limited to the evaluation of RNA levels at a single time point.

It was a presentation given at Georgia Tech by a scientist from IDT that made Tsourkas and his graduate advisor aware of how oligonucleotide chemistries could be used to move forward a project idea that used Molecular Beacons (MBs; see Definitions below) to image RNA within live cells. Since then, IDT has collaborated with Tsourkas and coworkers to design and supply several types of molecular imaging agents.

“IDT has done all of our oligonucleotide synthesis and modifications for over 10 years, dating back to when I was a graduate student. During this time, IDT has emerged as a world leader in the synthesis of complex oligonucleotides and imaging probes. We have never run into a problem when using an IDT reagent. If anything hasn’t worked, it has always been a fault of our own. Importantly, our interactions with IDT have not been just as a customer, but we have developed a relationship with them. We often work closely with IDT to move our research forward and have had a great deal of input from them over the years on probe design. This feedback has been invaluable. We want our technologies to be used by other researchers so it is very important to us that our probes are not only functional, but practical.” —Andrew Tsourkas

The Tsourkas lab noted that conventional MB probes present several challenges for live cell imaging. Upon cellular delivery, the probes were sequestered in the nucleus and commonly emitted false positive signals. Through years of research, Tsourkas, now an Associate Professor of Bioengineering at the University of Pennsylvania, discovered that if MBs are limited to the cytoplasm, they remain functional and do not elicit the detectable false-positive signal. Tsourkas and his students attached sterically-inhibitory nanoparticles or macromolecules to the MBs to force cytoplasmic localization. However, delivery of such large constructs presented other challenges. Most methods resulted in the encapsulation of MBs within endosomal/lysosomal vesicles, as seen by localized, punctate cytoplasmic staining, especially as observed over longer durations (12–24 hr). 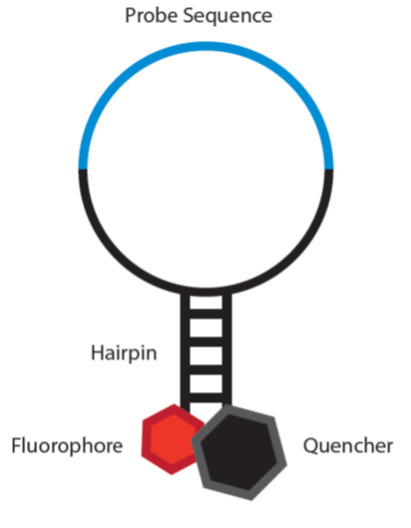 Figure 1. Conventional Molecular Beacon probe. At annealing temperature, in the absence of target sequence, a stem region holds the ends of the beacon together, and the quencher absorbs reporter dye fluorescence. However, in the presence of a perfectly matched, complementary sequence, the beacon hairpin is displaced and a more stable, double-stranded probe–target hybrid forms. Target hybridization separates fluorophore and quencher, and excitation at the appropriate wavelength results in fluorescence emission. Careful MB design will thermodynamically favor the unbound, hairpin structure over a non-specific or mismatched target sequence, which makes these probes highly specific. MBs have been used as probes for qPCR, SNP detection, allelic discrimination, and in diagnostic clinical assays.

It was at this time that the group came across an article in Nucleic Acids Research demonstrating that siRNAs, i.e., double-stranded RNA with 3’-UU overhangs, were efficiently transported out of the nucleus. They used this information to develop a structure that combines MBs with siRNA, creating an all-RNA probe that would keep the MB out of the nucleus without the need for macromolecules. To prevent knockdown of mRNA expression, the siRNA elements were disguised by adding 2’-OMe modifications. Tsourkas and colleagues now deliver these MB-siRNA imaging probes, termed Ratiometric BiMolecular Beacons (RBMBs), using microporation. Due to the siRNA component, the probe is transferred into the cytoplasm by an endogenous cellular mechanism.

No matter the technique used for delivery, the group found that their cells always contained varying amounts of probe. This differential delivery complicated quantification of target binding. Furthermore, since RBMBs emit a low fluorescent signal even when quenched, their sensitivity for target detection was reduced because signal from probe hybridization had to be above the variable background signal.

This delivery problem was easily resolved by adding a second fluorescent dye, which remained unquenched, to the structure. Tsourkas’ lab then used ratiometric imaging to estimate the amount of target RNA (RBMB reporter signal) in the cell by adjusting the reporter signal based on the amount of reference dye in the cell. The reporter dye, quencher, and reference dye could all be synthesized onto the same molecule in an exact 1:1:1 ratio. The structure also enabled addition of the reference dye at a sufficient distance from the functional MB dye and quencher to avoid any fluorescence energy transfer with the other fluorescent moieties.

Figure 2 provides a schematic of the group’s current MB imaging probe design. It localizes within the cytoplasm, gives no detectable false positive signals, and is easily delivered. The signal-to-noise ratio is now significantly higher for this new molecule, with background below the limit of detection for more than 24 hours in many cases, which allows imaging for an extended time course. 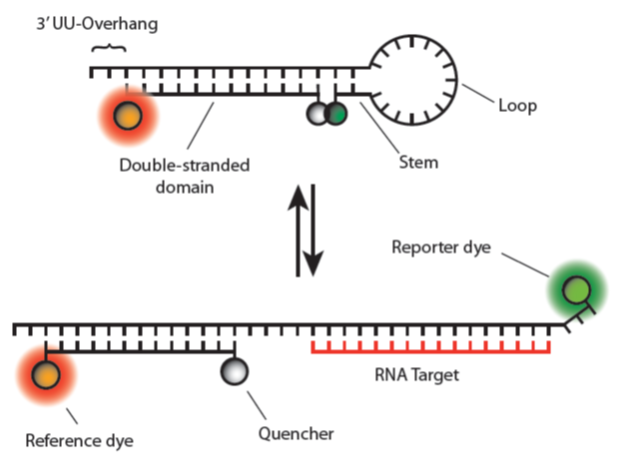 This new design enables imaging of specific RNA transcripts, though sensitivity still remains a challenge due to the need for a minimum amount of hybridized probe for signal to be detected above background. Consequently, use has been limited to highly expressed RNAs, i.e., those with at least 500 transcripts per cell. However, if researchers can use an engineered target for their research, then synthetic RNA targets that have multiple MB binding sites can be designed to amplify the MB signal. Amplifying the signal by this method makes it possible to track and visualize individual RNA transcripts, allowing researchers to actually see cell trafficking, measure the velocity of transcript movement, monitor localization within the cytosol, and visualize RNA from transcription through translation (Figure 3). “Our current MB probes don’t seem to affect gene expression and we retain good correlation with in situ methods for as long as 24 hours,” notes Tsourkas. “We are still working to quantify how accurately we can monitor temporal changes in gene expression, but thus far the results look promising.” 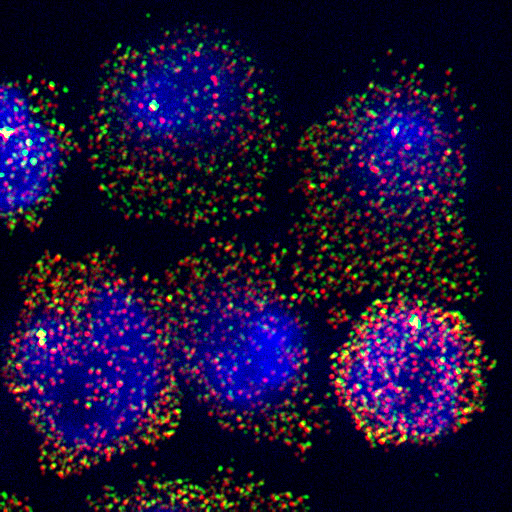 Figure 3. Detection of specific RNA transcripts in live cells. The RBMB probe was introduced into live cells to detect the presence of a target RNA transcript (red); DAPI (blue) is used to stain the nucleus. The cells were subsequently fixed and processed for FISH using multiple Rhodaminelabeled RNA probes (green) to the targeted mRNA to confirm the RBMB was detecting correct transcript.

The group’s interests lie in applying RBMBs to diagnostic applications, specifically breast and lung cancer. This has led them to develop multiple probes that would bind to a single RNA oncogene target. They also used their imaging probes to target miRNA. Targeting miRNA has several advantages: miRNAs have a much greater “diagnostic yield” than mRNA, and they are often expressed at high levels—1000–10,000 or more copies per cell, which coincides with the detection range for the RBMBs. Plus, the researchers only needed to look at the expression of a few miRNA biomarkers to yield data with diagnostic value.

The design of targeted nanoparticle-based magnetic resonance imaging (MRI) agents is another line of research in the Tsourkas lab. The group is focusing their efforts on the early detection of cancer. With breast cancer, for example, conventional technologies such as mammograms have limited sensitivity. While sensitivity can be boosted with contrast media, current agents often have very poor specificity, making it hard to differentiate between benign and malignant lesions. The molecular imagining agents the lab is developing have real value in providing a greater sensitivity to detect small lesions and higher specificity.

An application of great importance for targeted imaging agents is in identifying targets for therapeutics. For example, a common breast cancer therapeutic is Herceptin which is used to treat tumors that overexpress HER2/neu receptor (Human Epidermal growth factor Receptor 2). Molecular imaging using targeted nanoparticles provides an easy way to confirm that Her2/neu receptors are expressed and accessible. It may also be possible to use the nanoparticle probes to monitor the effectiveness of therapy. Currently, it is difficult to quickly determine whether a particular treatment regime is working. Rather than waiting months to see whether the cancerous tumor is shrinking, the nanoparticle imaging agents can be used to detect the expression of molecular markers for an earlier assessment of whether a particular drug therapy is effective. If working, the patient can be instructed to continue along that course of therapy; if not, the doctor can change treatment within days or weeks rather than months.

“IDT MiniGene Synthetic Genes have really helped us with these projects,” notes Dr. Tsourkas. “We order these synthetic genes that encode peptides, proteins, or single chain variable fragment antibodies. We then bacterially express the targeting ligands in the lab, which saves us a ton of money. Synthetic genes are much cheaper than continually buying expensive peptides or proteins and this approach provides us with substantially more flexibility. For example, we can easily and cheaply use site-directed mutagenesis to modify the sequence or to add amino acids as necessary. In contrast, each time we need to make a modification to a synthetic peptide, we need to make an entirely new order. Each order typically costs $300–400, and we only get a milligram of peptide. While a MiniGene Synthetic Gene may initially cost us a few hundred dollars, it allows us to express as much of the [protein product] in bacteria as we want, and with complete freedom. We make more than 1–10 mg at a time on a fairly regular basis—all at the cost of just one order.”

In the future, Dr. Tsourkas hopes to make these reagents commercially available to the broader research community for imaging of intracellular and extracellular molecules and processes. His group continues to design more robust imaging agents that can be used to detect any endogenous target and, in some cases, single molecules. Says Tsourkas, “Localization and single-cell information is still very difficult or impossible to get using conventional RNA and protein detection methods. We hope that our reagents will provide tools for these applications.”

Dr Tsourkas is an Associate Professor of Bioengineering and the Associate Director of the Center for Targeted Therapeutics and Translational Nanomedicine at the University of Pennsylvania. He also holds a position in the Department of Radiology and is a member of the University’s Institute of Medicine and Engineering (IME) and the Abramson Cancer Center (ACC). He recently received an NSF Career Award to develop a training program in molecular imaging where he has graduate and undergraduate students designing activatable fluorescent and bioluminescent proteins. Dr Tsourkas participates in GEMS (Girls in Engineering, Mathematics, and Science Camp) where he leads middle school girls in bioengineering research projects, shown here in the photo. Dr Tsourkas is also the co-founder and a scientific advisory board member of the start-up company, Vivonetics.

Gene fragments from 200 to 3000 bp shipped plated, or in suspension and ready for use.

DNA oligos of exceptional quality and length, available in tubes or plates.

Use these programs to calculate Tm, identify secondary structure, optimize codon use, select siRNA, and more.

No end to the modifications available. Shipped dried, hydrated, or annealed.

Indispensable for linking an oligo to another molecule, providing resistance to nuclease degradation, and more.