When COVID-19 swept through New York City, the public’s cooperation in adhering to stay-at-home orders played a significant and widely heralded role in pulling the nation’s most-populated metropolis out of a harrowing public-health crisis.

What isn’t widely known, however, is the significant role played by approximately 200 volunteer scientists, who bravely mobilized and headed straight into some of the most hard-hit and under-served communities in NYC in an effort to increase testing and track the spread of the pandemic. The New York Biomedical Technician Rapid Response Team (BTRRT) is a coalition of volunteer professional scientists that uses its collective laboratory training skills to venture into “hot spot” neighborhoods to bring widespread and accessible community testing through the deployment of mobile medical units. 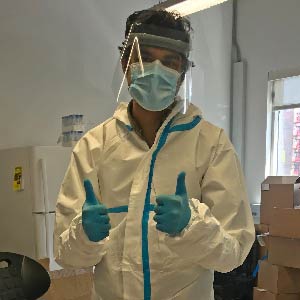 “Our emergency COVID-19 testing lab was established in less than six weeks in Flatbush, Brooklyn during the height of the pandemic,” said BTRRT co-founder Pardeep Singh (right). “Our workforce is wholly voluntary, with our supplies donated in-kind. We are focused on communities disproportionately impacted by COVID-19, and our mobile medical team goes out into these communities to collect samples. We use machine learning algorithms based on public health data to determine which communities to go to.”

BTRRT performs both pooled PCR and serological tests (for the viral load and the presence of protective antibodies), taking saliva samples from groups of people who are quarantined together or were previously existing in close contact, such as families and employees who worked in close proximity. Samples are pooled into a single qPCR reaction to increase throughput of viral detection. 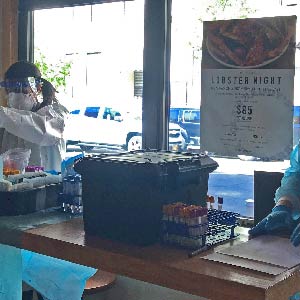 If a group sample is detected as positive for SARS-CoV-2, BTRRT follows up with point-of-care PCR tests to narrow down which members of the group are positive. Further follow-up testing is scheduled for all members of the group. The strategy of pooling samples into a single reaction affords BTRRT the ability to retest with minimal time and money spent on reagents, while maximizing the amount of people who can be reached.

“IDT’s donation will see us all the way through our testing goals for the foreseeable future,” Singh said. “These kits are part of our primary COVID-19 testing assays, and we have been desperately short on this item until now.”